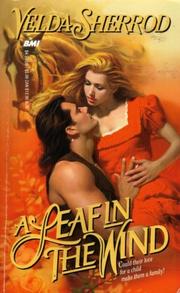 A Leaf in the Wind

Published May 1996 by Leisure Books .
Written in English

"A Leaf in the Wind" is the second episode of Book One: Air of The Legend of Korra and the second of the overall series. Along with "Welcome to Republic City", the episode debuted online on Ma It later aired on Nickelodeon, on Ap , in Directed by: Joaquim Dos Santos, Ki Hyun Ryu. A Leaf on the Wind of All Hallows is about what really happened to Roger's father, Jerry MacKenzie. I rather enjoyed this book because it was a realistic novella.. less than pages! I don't know how Diana did it but I'm so proud of her. It must've been hard to write a tiny book but I thank my lucky stars that she did/5. One Leaf Rides the Wind also teaches readers about I really enjoyed this book,because it was illustrated beautifully and showed Japanese culture. This book would be great for readers that are learning how to count,because it has poems with a number of objects in /5. One Leaf Rides the Wind has been added to your Cart Add to Cart. Buy Now Buy Used. $ FREE Shipping Get free shipping Free day shipping within the U.S. when you order $ of eligible items sold or fulfilled by Amazon. Or get business-day shipping on this item for $ /5(20).

Orphaned during World War II, Roger believed that his mother died during the London Blitz, and that his father, an RAF pilot, was killed in combat. But in An Echo in the Bone, Roger discovers that this may not be the whole story. Now, in “A Leaf on the Wind of All Hallows,” readers finally learn the truth.4/5(13). What rings Autumn? A single leaf? Leaves blowing in the wind? Let us look. “A fallen leaf returning to the branch? Butterfly.” ~~Anonymous “What message does the wind carry? Is the message different in a light breeze versus a tornado? Feel the words.” ~~ME “Yellow the bracken, Golden the sheaves, Rosy the apples, Crimson the leaves: Mist on the hillside, Clouds grey . “A Leaf on the Wind of All Hallows” is a short story (no, really. It is. Honest! It’s 16, words, about). It tells the WWII story of Roger MacKenzie’s parents, Jerry and Dolly — and provides and fills in the answer to one of the small mysteries opened in AN ECHO IN THE BONE. (Though as one astute observer commented, “I bet you filled it in with dirt you dug from another hole!”). "A Leaf on the Wind of All Hallows" (), a short story in the anthology Songs of Love and Death, later collected in A Trail of Fire (), and Seven Stones to Stand or Fall (). It tells the WWII story of Roger MacKenzie Wakefield's parents Jerry and Dolly, as Jerry discovers for himself the mystery of the standing : The Exile: An Outlander Graphic Novel ().